Tulsa is located in the north eastern corner of Oklahoma, ninety nine miles northeast of Oklahoma City. It is situated between the edge of the Great Plains and the foot of the Ozarks in a generally forested region of rolling hills. Tulsa touches the eastern extent of the Cross Timbers, an eco-region of forest and prairie transitioning from the drier plains of the west to the wetter forests of the east. With a wetter climate than points westward, Tulsa serves as a gateway to “Green Country”, a popular and official designation for northeast Oklahoma that stems from the region’s green vegetation and relatively large number of hills and lakes compared to central and western areas of Oklahoma, which lie largely in the drier Great Plains region of the Central United States. Containing seven of Oklahoma’s eleven eco-regions and more than half of its state parks, north eastern Oklahoma, located near the western edge of the United States Interior Highlands, is the most topographically diverse part of the state. The region encompasses thirty lakes or reservoirs and borders the neighboring states of Kansas, Missouri and Arkansas. 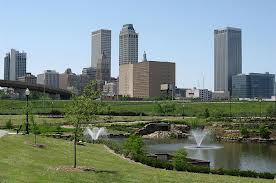 Tulsa is split by the prominent Arkansas River, which flows in a wide, sandy bottomed channel. Its flow through the Tulsa area is controlled by upstream flood control reservoirs. Its width and depth can vary widely throughout the year, such as during periods of high rainfall or severe drought. However, in the area adjacent to downtown Tulsa, a low water dam maintains full channel at all times. This portion of the river is known as Zink Lake. Tulsa is heavily wooded and with abundant parks and water areas. The city also holds several prominent hills with names such as “Shadow Mountain” and “Turkey Mountain”.

These hills create   varied terrains, especially in its southern portions. While central and northern sections of Tulsa are generally flat to gently undulating, the Osage Hills extension into the north western part of the city further varies the landscape. Holmes Peak, in the northwest corner of the city, is the tallest point in five counties at one thousand and thirty feet.