“Renaissance” has been a common theme among city leaders. This way of thought has been reinforced by the construction of the Renaissance Center in the late nineteen hundred and seventies. This complex of skyscrapers which was designed as a “city within city”, together with other developments, slowed and eventually began to reverse the trend of business leaving Downtown Detroit. Some city limit signs, particularly on the Dearborn border say “Welcome to Detroit, The Renaissance City Founded seventeen hundred and one.” 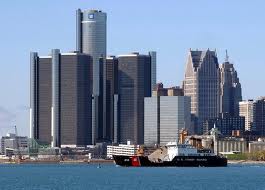 The city’s riverfront also has been focus of much development. In two thousand and one, the first portion of International Riverfront was completed and in succeeding years, waterfront gained miles of parks and fountains.