Washington DC homes the National Archives which houses thousands of documents important to American history including the Declaration of Independence, the United States Constitution and the Bill of Rights. The Library of Congress, located in three buildings on Capitol Hill, is the largest library complex in the world with a collection of over one hundred and forty seven million books, manuscripts and other materials. The United States Supreme Court Building was completed in nineteen hundred and thirty five. Before then, the court held sessions in the Old Senate Chamber of the Capitol. 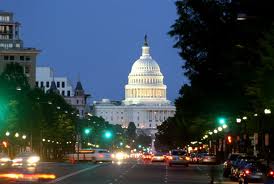 The Smithsonian American Art Museum and the National Portrait Gallery are located in the same building of Donald W. Reynolds Center, near Washington’s Chinatown. The Reynolds Center is also known as the Old Patent Office Building. The Renwick Gallery is officially part of the Smithsonian American Art Museum but is located in a separate building near the White House. Other Smithsonian museums and galleries include: the Anacostia Community Museum in South east Washington; the National Postal Museum near Union Station and the National Zoo in Woodley Park.